India is the market leader in high quality generic medicine. The drugs that people from Africa to the Americas to Japan rely on to relieve ailment.

But you probably haven’t heard of India’s market dominance. Instead, what you’ve likely heard of is quality lapses, squalid facilities, and FDA warning letters to our pharma giants.

How do we reconcile these narratives? How is it, that the world’s sick has been treated by Indian generics for decades, while we continue to operate low quality sweat shops?

As with most things, these narratives miss a lot of nuance.

The reason why we get so much bad press, is because of lapses in the system. It could be something from the trivial – such as an employee forgetting to note down the time or temperature at which a sample was collected, and then jotting it down from memory after the fact. To the serious – such as the manufacturing team making a “subjective” call to clear a batch with 99.7% concentration, instead of the required 99.9%.

Most pharma and biotech employees (myself included), lead wholesome and honorable lives. Why is it that we behave in a way that puts us and the organization at enormous reputational risk at work? 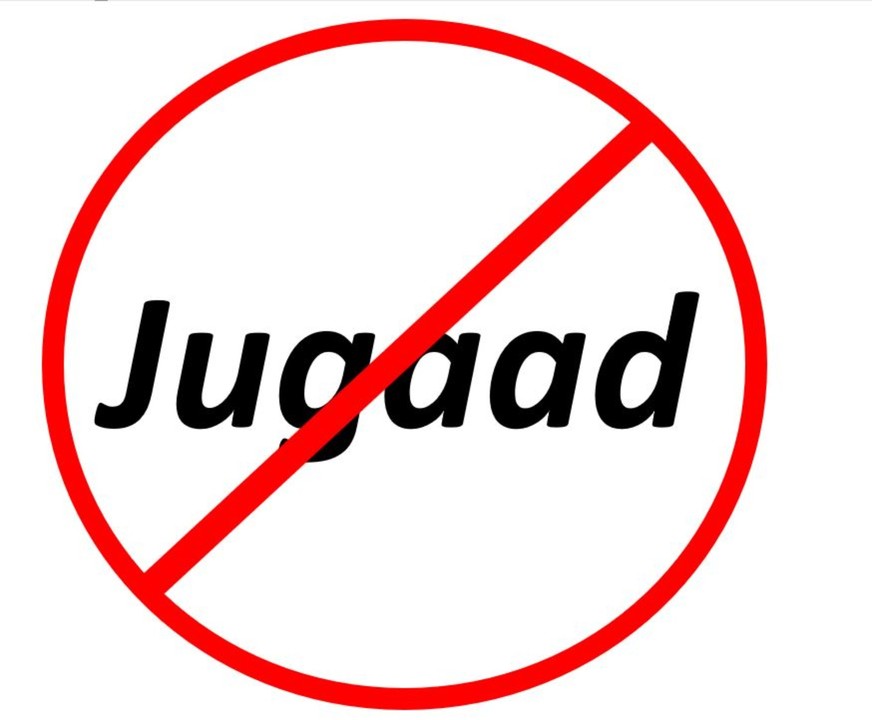 The truth is all around us – and it’s jugaad. We start our day by using water delivered by private tankers – a jugaad to make up for the lack of municipal water supply. All around us are commuters taking “shortcuts” – jugaad to get thru traffic jams. Predictably, but unknowingly, we take this behavior to the workplace. Is it reasonable to assume that an employee who submits pre-dated rent receipts (sometimes at official prodding) to qualify for house rent allowance, will suddenly become a stickler for systems when he takes over an experiment?

Jugaad is loosely translated as a semi-legal hack. But this translation misses an important aspect. The person who indulges in jugaad is usually convinced that there is no downside. Example – I am convinced that going against traffic won’t kill anyone. Another example – clearing a batch that turned up 99.7% pure instead of the specified 99.9% sure as hell won’t hurt anyone who takes the drug.

Organizations try to reinforce systems by what’s broadly called “training”. There are teams that are responsible for rolling out online modules, conducting seminars and tracking employee progress. But the focus is on the “what” of training. Ie: what statistics, methods and protocol needs to be covered, and what’s considered passing grades. But the “why” of the whole exercise is missed.

Employees who are otherwise ethical and hardworking, take shortcuts at work because they are not fully aware of the cost of jugaad. That mistakes, however unlikely, are catastrophic in the healthcare business. That what appears mundane and unimportant actually is the building block of a high-quality environment.

In other words, communicating the reason why 99.7% is fail while 99.9% is pass, is everything. Training modules that emphasize the numbers and methods, but not the context or background is bound to fail.

This emphasis on the “why” of things needs to be a top down effort which aims to inculcate curiosity, transparency, thoroughness and honor in everyday work in all employees. We can then sleep easy; assured in all the great things that Indian pharma and biotech is up to.